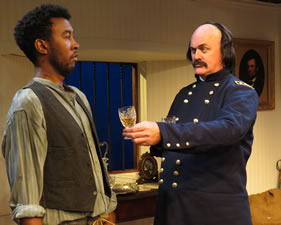 You wouldn't think that the subject of slavery would be an obvious choice for comedy. And yet the writer James McBride pulled it off with "The Good Lord Bird," his comedic novel about a young slave's view of the abolitionist John Brown, which won the National Book Award for Fiction in 2013. And now playwright Richard Strand is doing much the same thing with Butler, a surprisingly genial comedy about slaves seeking sanctuary with the Union Army during the Civil War that opened at the 59E59 Theaters this week.

Butler's story is based on the eponymous Union general Benjamin Franklin Butler who devised a legal way to circumvent the Fugitive Slave Law that said runaway slaves must be returned to their masters. Strand's version hews close to the real-life story in which three slaves laboring for the Confederate forces escaped to Fort Monroe, the only Union facility in Virginia, and appealed to Butler for refuge (click here for a full account of the real story).

Only one of the three, a man named Shepard Mallory, is seen in the play and like many recent fictionalized accounts of the period (Quentin Tarantino's "Django Unchained," the new cable series "Underground" and McBride's "The Good Lord Bird") he's smarter and more courageous than most of the white folks he encounters.

Some might quibble with this interpretation of the way things might have been but history is always subjective and susceptible to myth making and it's refreshing to have these new, even if wishful, archetypes replacing the old shameful stereotypes.

Strand smoothes the transition by making Butler go through the process of reconciling his image of what a slave should be with the presence of the obviously charismatic Mallory in the same way that the audience does.

Much of the play's humor is derived from the general's consternation as he tries to keep up with Mallory; much of its heart from his determination to go against his nature (the real Butler supported Jefferson Davis for president at the 1860 Democratic convention) to do the right thing.

It's a delicate balancing act and director Joseph Discher brings it off, letting the audience know that it's OK to laugh but refusing to let the show devolve into a cartoon.

This production first played at the New Jersey Repertory Company in Long Branch, N.J. two years ago and has smartly moved here with its four-member cast and a beautifully detailed set intact.

Made up and padded to resemble photographs of the real Butler, Ames Adamson gives a wonderfully sympathetic performance. And John G. Williams is even better as Mallory, alternately wily and winsome, always making it clear that Mallory knows he isn't in control of his destiny but that he should be.

As its very name indicates, the focus of Butler is, yet again, how the issue of race affects a white person. But Williams' centered performance commands attention for the plight of Mallory—and, by extension, all other black people—as well.

It's nice to see a regional theater like New Jersey Rep stretching outside the ranks of familiar playwrights and safe subjects. And it's very nice to have this reminder, especially in these times, that the course of history can be changed by the willingness to take one valiant step after another—and that humor may help ease the way.