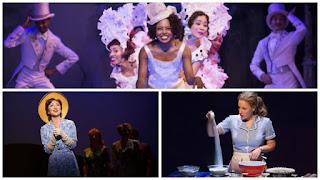 From the moment that Hamilton's revolutionary troupe stepped onto the stage at the Richard Rodgers Theatre last summer, it was clear that Lin-Manuel Miranda's hip-hop infused celebration of the once-forgotten Founding Father would be the favorite for this year's Tony Award for Best Musical—and deservedly so.

Still, you've got to feel some sympathy for all the folks who worked so hard on the other musicals that opened on Broadway this past season and especially for the four that have also been nominated for the top musical honor that will be given out this Sunday night.

I talked about School of Rock earlier this year (click here to read my review) but I haven't had a chance to share my thoughts on the other three contenders and so as we head into the final stretch of the race, I'm going to do another of my highlights and lowlights round-ups for those shows.

BRIGHT STAR. The influx of migrants from the movies and the pop music worlds continues with this blue grass musical, whose book, music and lyrics were written by the multi-hyphenate actor-musician-et. al. Steve Martin and the singer-songwriter and Paul Simon spouse Edie Brickell. Their tale, inspired by a news article, tracks two storylines (a country girl's ill-fated love affair in 1923 and a WWII vet's literary aspirations in 1945) that fatefully—and sentimentally—merge before the final curtain.

Highlight: In her Broadway debut, Carmen Cusack, who previously worked on London's West End and in U.S. touring companies, gives a star-making performance, believable as both a naïve country girl and a sophisticated New York editor.

Lowlight: The music is pat-your-foot pleasant but the words, whether sung or spoken, are plodding and predictable. Ticket sales have been weak throughout the run and the show's creators have reportedly been writing checks to keep it going, presumably hoping that a performance on the Tonys will draw summer theatergoers.

Tony Spotlight: Although it picked up five nominations, including one for Cusack, it's unlikely that the show would have been a winner even if Hamilton weren't in the mix.

SHUFFLE ALONG, OR THE MAKING OF THE MUSICAL SENSATION OF 1921 AND ALL THAT FOLLOWED. Director George C. Wolfe has assembled an all-star cast (Audra McDonald, Brian Stokes Mitchell, Billy Porter, Brandon Victor Dixon and Joshua Henry) to tell the story surrounding the first Broadway show to be entirely created and performed by African-Americans. As much a game changer in its day as Hamilton is in ours, the original Shuffle Along was not only a massive hit but brought jazz and hardcore hoofing to the Broadway stage.

Highlight: That cast! Even the hard-dancing ensemble is terrific. Plus there's the delightful score by Noble Sissle and Eubie Blake.

Lowlight: Restoring the reputation of this often forgotten show has been a dream of Wolfe's since he was in college but his eagerness to make a case for it occasionally tips over into the pedantic.

Tony Spotlight: None of the show's three biggest names were nominated, not even McDonald, who has a record-breaking six Tonys. But Dixon got a best supporting nod for his portrayal of her love interest Eubie Blake and Adrienne Warren, in her Broadway debut, got one for playing two very different ingénues. Neither is a frontrunner in his or her category but Shuffle Along does have a fighting chance of winning at least a couple of its 10 nominations (second only to Hamilton's 16) and the odds seem particularly good for Savion Glover, who devised the show-stopping choreography.

WAITRESS. Adapted from the 2007 indie movie of the same title, this show centers around a pregnant waitress who's stuck in a bad marriage. Salvation is presented in the forms of her mystical talent for pie making, her quirky friends at the diner where she works and the possibilities of a romance with her gynecologist.

Highlight: Pop songwriter Sara Bareilles' tunes are catchy and Jessie Mueller is every bit as endearing and clear-voiced as she was for her Tony-winning portrayal of Carole King in Beautiful. Plus you can actually buy and eat pie during the intermission.

Lowlight: There really isn't one, unless you penalize the show for being a touch old-fashioned.

Tony Spotlight: It's paltry four nominations (neither Mueller nor director Diane Paulus got one) suggest that the nominators were among the underwhelmed but the show has been selling out since it opened, which is another way of bringing home the gold.

Now, I hope you'll come back on Saturday for my thoughts on a few of the Tony-nominated plays. In the meantime, do check out the articles and videos I've been collecting in my Tony Talk magazine on the Flipboard site, which you can find by clicking here.