Lukewarm on This "Cat on a Hot Tin Roof" 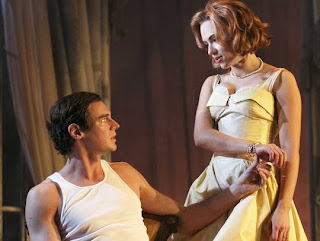 Everything I’d read about the latest revival of Tennessee Williams’ Cat on a Hot Tin Roof promised that it was going to be a hot mess. The show’s top-billed star Scarlett Johansson kept hinting about how she wanted to tone down the sexiness of the character Maggie, who is known for her sexiness. In his interviews, her co-star Benjamin Walker, who plays Maggie’s alcoholic and perhaps closeted husband Brick, was saying that “bringing a sexuality and a vitality to the play” would distinguish it from previous productions. Notice any contradictions?

So I’ll admit that when my friend Priscilla and I settled into our seats at the Richard Rodgers Theatre, where the show is scheduled to play a limited run through March 30, I was prepared to wallow in the schadenfreude of it all. But guess what? The show isn’t as bad as I thought it would be or as bad as some of the critics have made it out to be, judging by the C- it scored on StageGrade, which aggregates the opinions of the city’s top reviewers (click here to read some of them).
This is not to say that the production is all that good either. But even a tepid production of Williams' Pulitzer Prize-winning play (his second to win the prize) is a reminder of just how great he really was.

Because of the 1958 movie, with an unabashedly sexy Elizabeth Taylor as Maggie and Paul Newman as Brick, Cat on a Hot Tin Roof is one of the most familiar plays in the canon.  And Williams’ tale about the secrets and lies of a nouveau riche southern family gathered for what may be the final birthday of its patriarch is one of the most frequently revived.
This is the sixth Broadway production since the original premiered in 1956. The standouts among them have been Elizabeth Ashley’s legendary turn in 1974, Kathleen Turner’s smoldering one in 1990 and an all-black version five years ago in which James Earl Jones stole the show as the domineering Big Daddy.
The current production is unlikely to join that list of the memorable ones.  But it’s still an interesting effort. For the actors playing each of the principal family members—Maggie, Brick, Big Daddy and his wife Big Mama—have tried to come up with fresh takes on their now-iconic characters.
The temptation to do that is understandable.  Who wants to play—or see—the same old thing that has been done a zillion times? But there are some limitations.  First, any new interpretation must be rooted in the text. And second, it helps if the director coordinates the individual explorations that the cast members are making. Alas, there were lapses on both fronts in this production.

Having won a Tony three years ago for her supporting role as the niece in A View From the Bridge, Johansson was eager for a bigger challenge (click here to see an interview with her). Indeed, her sultry voice, curvaceous body and feisty personality make Johansson a natural for Maggie, who grew up in genteel poverty and will do whatever it takes to hold on to her place in the rich family she’s married into.

But in her effort to be a different kind of Maggie, Johansson mutes the character to the point that Maggie’s impassioned desperation comes across as petty whining. Similarly, Walker, tall, lean and almost girlishly pretty, would seem to be an ideal Brick (click here to read about him).  But the role is mainly subtext and Walker just stays on the surface so that his Brick seems little more than a sullen rich boy who likes to drink.
The stage vet Debra Monk completely reimagines Big Mama, who is usually played as an aging airhead totally cowed by her husband. But Monk’s Big Mama is so ballsy that it’s not hard to imagine her taking over the running of the family plantation and doing a decent job of it (click here to read an interview with her). It’s an interesting spin on the character but I’m not sure it was what Williams intended.

I had worried most about Ciarán Hinds, not so much because the actor is less physically imposing than previous Big Daddys have been or because he is Irish but because I had seen him in “Political Animals,” the TV series in which he played a Bill Clinton-like ex-president to Sigourney Weaver’s Hillary Clinton-like Secretary of State and Hinds’ accent and mannerisms were so over the top that I stopped watching midway through the pilot.
But Hinds has toned down the cornpone for his rendition of Big Daddy.  He isn’t as crude or menacing as some of his predecessors have been in the role but Hinds is so honest in the man-to-man talk between father and son that it is not only the centerpiece of the second act but the best part of the entire evening (click here for a Q&A with him).
It isn’t, however, enough to overcome the baffling things that Ashford has done to make the play his own. Both the onstage ghost and the interporlated songs had been cut by the time I saw the show.  But just as egregious was the decision to keep sound effects so intrusive that they often drowned out important lines in the dialog.  And don’t get me started on the “happy darkies” motif he's woven throughout the show.
Even set designer Christopher Oram has been allowed to improvise—again to the detriment of the text.  The play has Maggie saying “walls have ears.” But there are few walls in sight. If there were as much transparency as all this set’s windows and gauzy material would suggest, lots of secrets would have been outed long ago.
And yet, the pathos in Williams’ script still manages to claw its way out.  Some regular theatergoers gripe that Broadway gets too many revivals of plays like Cat on a Hot Tin Roof. But not me.

I know that these old shows may be driving out some new shows (click here to see NYTimes theater reporter Patrick Healy's smart piece on this phenomenon) but I’m still envious of the opera lovers who get to see what different performers bring to their noblest warhorses season after season.  And so I’m already itching to see another production of this play—but I'm also hoping that one will bring more heat.

as always incisive. You give the reader a good reason to exercise the eyeballs.