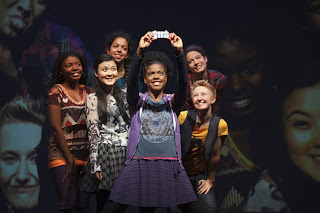 Eve Ensler hit the theatrical equivalent of the Mega Millions lottery with The Vagina Monologues, her collection of solo pieces in which women talk about the full spectrum of the feminine experience, ranging from the pleasures of orgasms and becoming a mother to the horrors of rape and genital mutilation.  But she’s unlikely to score as big a hit with her latest work, Emotional Creature, which covers some of that same territory but this time from the perspective of adolescent girls.

For starters, the title of the new show, which is playing at The Pershing Square Signature Theater through Jan.13, is nowhere near as brazen as that of its older sibling.  And the same thing holds true when, as is unavoidable, the shows are held up against one another.

That doesn’t mean that some of the stories adapted from Ensler’s book “I Am an Emotional Creature: The Secret Life of Girls Around the World” aren’t compelling (click here to read an interview with Ensler). Only totally atrophied hearts could be unmoved by the despair of a teenaged prostitute in Bulgaria or the anguish of a young sex slave in the Congo.

Other segments of the show deal with anorexia, coming out and even making Barbie dolls in a Chinese factory.  But because Emotional Creature is about—and presumably aimed at—tweens and teens, these tales are juxtaposed alongside others about wanting to fit in with the cool crowd at school and accepting the way one looks.The overall effect is sometimes jolting and tends to trivialize the more serious issues.

Same goes for the peppy girl-power anthems that are sprinkled throughout the piece and sound as though they’ve been lifted from the “Free to Be You and Me” songbook.

But now I worry that I’m making the show sound far worse than it is.

What saves Emotional Creature is that Ensler and director Jo Bonney have put together a six-member cast that is multi-ethnic but uniformly talented. Each young woman is given several moments to shine and all six of them glow. Still, I can’t help singling out Joaquina Kalukango, who is shattering as the Congolese sex slave.

Bonney's staging is also engaging and incorporates references to Facebook, Instagram and other smartphone technology.  And despite the sad stories that are told, the 90-minute show ends on a high note as the young women celebrate the potential of women in the 21st century.

So ignore my grumpiness. This may be just the ticket if you’re looking for some holiday entertainment for a sophisticated girl who feels she’s outgrown Annie or Mary Poppins.  And, apparently, you don’t have to be 15 or under to appreciate the show’s empowerment message. The two women sitting in front of me looked to be at least three times that age but at the show's end, they stood and pumped their fists in the air.