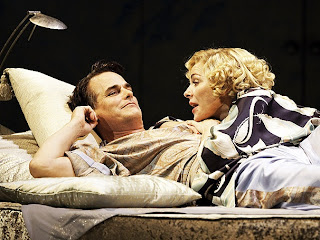 Like every exclusive society, the world of theater lovers has its unspoken rules.  For starters, we’re all supposed to genuflect to everything by Shakespeare, mostly everything by Chekhov, musicals by Stephen Sondheim and comedies by Noël Coward.
Well, don’t tell anyone but I'm just not that crazy about Coward's arch comedies. Which means I wasn’t sure what kind of time I was going to have at the latest revival of Coward’s Private Lives, which is now playing at the venerable Music Box theater (acknowledging fondness for it is another one of the rules).
So like most Coward philistines, my chief interest in this production was the chance to see Kim Cattrall, who, of course, is best known as Samantha Jones, the most-lascivious of the women in “Sex and the City.”
Cattrall, who was born in Liverpool and grew up in Canada, trained at both the London Academy of Music and Dramatic Art and the American Academy of Dramatic Arts in New York. But the revival’s producers have shrewdly played up the question of whether “Samantha” would be believable as Amanda, the sophisticated divorcee who discovers that she’s still in love with her first husband Elyot while both he and she are on honeymoons with their new spouses.
Coward wrote the play for himself and his good buddy Gertrude Lawrence and over the years, Amanda has been played by such divas as Tallulah Bankhead, Tammy Grimes, Elizabeth Taylor, Maggie Smith  and, in a much acclaimed 2002 production, Lindsay Duncan. I don’t if Samantha Jones would fit on that list but Cattrall seems quite comfortable there (click here to read a profile of her).
The success of the play hinges on the connection between the two former-now-back-in-love spouses.  And both the comic and sexual energy are entirely believable between Cattrall and her co-star Paul Gross, whom the most devoted of theater lovers will know as Geoffrey Tenant, the perpetually frazzled director of a theater repertory company on the Canadian-produced TV series “Slings and Arrows” (click here to read my review of the series and here to read about him.)
Catrall’s Amanda provides the effervescent gin to their cocktail; Gross’ Elyot is the debonair vermouth. The mix is tasty and satisfying.  Cattrall is 55 and Gross is 52, which makes them both a generation older than the characters are supposed to be but they used the extra mileage to give the characters a little extra emotional depth that appealed to folks like me for whom the jokes wear a thin after a while.
I suspect that a large part of the credit for that goes to director Richard Eyre (to whom I will always be grateful for “Changing Stages”, the wonderful history of English theater that ran on PBS a few years ago and that was also turned into a terrific book).  (Click here to read about him.)
The only off-note is the set for Amanda’s apartment in the second act. I’m guessing that designer Rob Howell thought his idiosyncratic set would show what a free spirit Amanda is but—not quite deco, not quite modernist—it’s just bizarre.
Still, I had a good enough time.  My theatergoing buddy Bill, a Coward fan and a member in better standing in the world of theater lovers, had an even better one.  And besides, who, in these dismal days, doesn’t need a laugh, even if it’s only an old-fashioned chuckle.

I loved this post! I feel absolutely the same about Noel Coward. I observed the same to my cousin who sees everything. As always honesty and great writing!