"The Select" is Too Eclectic for Its Own Good 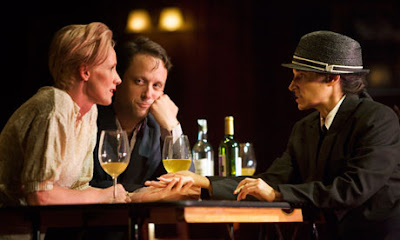 Cleverness can be its own curse.  Elevator Repair Service became a critics’ darling with Gatz, the experimental company’s dramatized reading of the full text of F. Scott Fitzgerald’s “The Great Gatsby.” It followed that up with The Sound and the Fury (April Seventh, 1928,) a word-for-word depiction of the first chapter of William Faulkner’s masterpiece. Now, it completes its trilogy of great American novels with The Select (The Sun Also Rises,) an adaptation of Ernest Hemingway’s novel that opened on Sunday at New York Theatre Workshop.
ERS members famously work collaboratively to develop their shows but they don’t seem to have reached a consensus on this one. Too many of the choices seem arbitrary and the tone bounces all over the place. The strain to be clever and to do something different is evident.
Unlike its text-faithful predecessors, The Select edits down the words of the novel and the result is neither fish nor fowl: the thrill of watching how ERS has come up with imaginative ways to act out every word in a book is gone but the satisfaction of a well-crafted play with fully drawn characters isn’t fulfilled.
There are other disjunctures too.  Hemingway’s novel is rooted in a defining place and time as it follows a group of expats roaming aimlessly around Europe after the upheavals of World War I. But director John Collins and set and costume designer David Zinn want to make this story a metaphor for all “lost generations” and so put some actors in Jazz Age flapper wear and others in hipster-style hoodies and leggings. It’s like setting “Gone With the Wind” in post-Katrina New Orleans; the underlying themes may be the same but a lot gets lost in the transposition.
Similarly, incidents that were written for dramatic effect in the novel are inexplicably played for laughs in The Select, which borrows the name of the bar where the characters gather and drink until they can barely stand up (everyone in the cast downs endless glasses of colored water). The Arcadian fishing scene in the book is staged as a comic sequence complete with flying plastic fish.

At other times, in an apparent effort to show the futility of the endless partying in which the characters indulge, the entire cast breaks into a silly dance that is amusing at first but goes on and on and on. And on.
Collins, who founded the company, started out as a sound engineer and ERS has always prided itself on its distinctive sound effects.  There are a lot of them in The Select and some are smart and amusing (click here to read a piece the NYTimes did on them). But they become less entertaining when they, too, are repeated Ad nauseum.
People in the audience the night I saw the show got antsy. The man behind me kept fidgeting in his seat and yawning loudly. The silver-haired gay couple in front of me exchanged distressed looks with one another throughout the first act and without saying a word fled as soon as the lights came up for intermission.

They weren’t alone.  Lots of folks left.  I thought about it too but decided to suck it up and stay on for the full three hours.
And it wasn’t a total waste of time. There are fine scenes when the company stops trying so hard and simply relies on Hemingway’s words as it does with the novel’s set piece that introduces the young matador with whom the central female character Brett Ashley (vividly realized by Lucy Taylor) has an affair. And the simple but creatively-staged bullfight towards the end of the show actually had me leaning forward in my seat.
Playing the matador with total commitment and nary an ironic wink, Susie Sokol gives the character the same authentic nobility that the book does. She isn’t trying to be clever and she’s the best thing in the show.