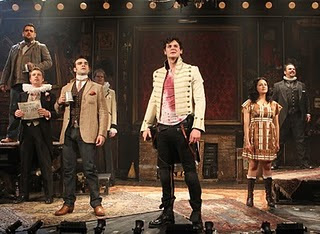 There seems to be no higher compliment these days than to call someone a “rock star.”  So I suppose Alex Timbers and Michael Friedman, the creators of the new satirical musical Bloody Bloody Andrew Jackson, which is currently playing at The Public Theater, thought it was damn clever when they hit on the idea of portraying the nation’s seventh president as a self-luminous emo rocker.

Emo, for the uninitiated, is a kind of punk music that specializes in self-consciously, self-pitying teen angst. “Life sucks and my life sucks in particular,” goes a lyric from the show. Which pretty much sums up the music’s philosophy and the musical’s world view, particularly about American politics.

The show’s flamboyantly anachronistic Andrew Jackson is a pouty frat boy who addresses his cabinet members as “bro” and bounds into the audience to give women lap dances. He makes references to Michel Foucault and Susan Sontag.  He is simultaneously too smart and too dumb for his own good.  And so is this show. (Click here to see a trailer that I find more enjoyable than the show itself.)

Benjamin Walker gives a rock-star making performance of his own in the title role. And its bloodiness is meant literally as well as metaphorically; the real-life Jackson was not only a battle-scarred veteran of many wars but, it seems, regularly bled himself. Timbers, who has directed the show as Grand Guignol, takes advantage of that to regularly splatter Walker with blood.

Tall, dark and hunky, Walker sings well and is amply endowed with lots of can’t-take-your-eyes-off-him charisma.  But his portrayal bears very little resemblance to Old Hickory, as Jackson was nicknamed in tribute to his toughness.

Besides the fact that his face is on the $20 bill, the main thing I knew about Jackson before seeing Bloody Bloody Andrew Jackson came from a story in my old elementary school textbook that told how, as an early populist, he declared the White House to be the People’s House and opened its doors to the public, only to have them trash the place.

The musical taught me more stuff about him—that he was a relentless Indian fighter but adopted and raised an Indian son; that like Al Gore, he won the popular vote in his first presidential election but lost the office when the Senate awarded it to John Quincy Adams; that he may have been involved in bigamy because his wife probably hadn’t divorced her first husband before marrying him, causing Jackson to fight numerous duels to defend her honor.

All interesting stuff, and all fodder for the show’s mocking humor, which, in essence, trashes Jackson all over again. Still, the reviews for Bloody Bloody Andrew Jackson have largely been raves, with the critics hailing it as trenchant commentary on everything from the George W. Bush presidency to the rise of the current populist-driven Tea Party movement (click here to see the reviews on StageGrade). Maybe I’m just getting old but Bloody Bloody Andrew Jackson seemed more like jejune hijinks to me.

I get that the Great Man approach to history no longer works (a history teacher-narrator is literally trashed during the show) and that we need to face up to the wrongdoings (the enslavement of blacks, the genocidal wars against the Indians, the disenfranchisement of women) in the nation’s past.  I’m no flag-waving red stater either. But I do wonder what kind of nation we’ll be in the future if all we can do is find fault with or make fun of who were and who we are. Isn't there some middle ground between the hagiography of the past and the they're all hacks attitude of the present?

As the twentysomething young women sitting behind my pal Bill and me whooped with laughter at the antics on stage, I wondered if they had any idea of what figures like Jackson had done to shape this nation (and in Jackson's case, the Democratic Party) as well as the liberties we all now take for granted. And I was pretty sure that Bloody Bloody Andrew Jackson wouldn’t enlighten them.

Oooh. Disagree! Just got back from it and was amazed at how in sync it was with the ambivalence AND detail of Meacham's Jackson biography. It actually reminded me of 1776, which was also awesomely accurate in its details!
And of course, that Walker fellow...is hottttt.

Hmmm. 1776 is one of my very favorite musicals of all times and I don't see the comparison. But we're in total agreement on Walker's hottness.

I saw this both at the Public Theater this spring and just this week in its opening preview on Broadway. I am 52 years old and a huge history buff. I love this musical. It was smart, funny, historically accurate AND topical. Not to mention well-acted. I have tickets to see it again in two weeks. It's not just for twenty somethings; it's for anyone with a dark sense of humor and a sharp political sensibility.

I'm with you. I would have walked out at intermission -- something I've never done in all my theatergoing -- except there is none. Unlike you, I was not looking for historical accuracy -- I was simply looking for some cleverness and insight to go along with the juvenile humor. Pretty lame.

Teach, thanks so much for leaving your comment. I'm happy that you liked the show and that it's getting a shot at Broadway. I intend to see it there and I'm hoping it works better for me this time around. But right now, I remain in the camp with Anonymous.

You said yourself that "the musical taught me more stuff about him" - which I have found to be a really strong point. Everyone I know (myself included) who's seen it and did not have a previous working knowledge of his life and times, has run to check out bios, Wikipedia, whatever, to learn more. Anything that makes people want to delve into political history is a good thing. Plus, what with all of the revivals and musicals based on movies, a fresh, new, original piece of work is welcome. And it rocks.

Those are good points, Anonymous. Thanks for taking the time to make them here. One of the things that I'm growing to like about this show is the nature of the conversation that it's stimulating. As I've said, I'm planning to see it again and I'm hoping to like it more.