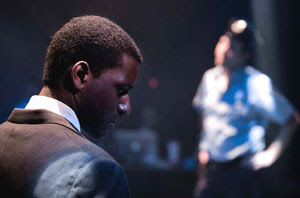 Two new plays with black characters as central figures opened on Sunday.  Which will probably add more fuel to the ongoing debate about whether having a black family in the White House has prompted artistic directors and commercial producers to invite more African-American actors, writers and directors into theirs (click here to read a Variety article about the trend and here to read a response from the blogger Playgoer). At least 20 shows in which race plays a role have opened in New York since September.  And that can't help but be noteworthy because there's more than one reason that Broadway is also known as the Great White Way.  The two new shows are smaller, off-Broadway efforts but the lack of diversity has been pretty much the same there too.  I haven’t had a chance to see A Cool Dip in the Barren Saharan Crick, Kia Corthron's play at Playwrights Horizons that, according to what I’ve read, mixes theology and ecology in a story about an African student who moves in with a troubled African-American family in a drought-stricken rural community.But I did catch the Godlight Theatre Company’s production of In the Heat of the Night, a stage version of the iconic 1967 movie that starred Sidney Poitier as black police detective Virgil Tibbs who is drawn into solving a murder case in the still-segregated south.  It’s playing in the tiny black box theater at the 59E59 Theaters and its young 10-member cast, several of them doubling and tripling up on roles, is so hardworking and sincere that I wish I could say that I liked the show.  But, despite Joe Tantalo's arty staging and a strong performance by Sean Phillips as Tibbs, I couldn’t figure out why they’d decided to make a play out of this story—which, as my husband K noted when he refused to see it with me, has already enjoyed success as a novel, a movie and a TV series—if they didn’t have anything new to say. Still, watching it and most of the other race-related shows of the season got me thinking about a whole bunch of other questions that seem ripe for debate, like:


⁍Can a black character act foolish on stage without being compared to Stepin Fetchit as I did in talking about the character Anthony Mackie plays in the new Martin McDonagh comedy A Behanding in Spokane?

⁍Is it O.K. for characters to say the word “nigger” in a play?  And does it make a difference if the playwright putting the words in their mouths is black (as Suzan-Lori Parks does in her latest work The Book of Grace) or white (as McDonagh repeatedly does in A Behanding in Spokane)?

⁍Should the color of an actor’s skin pass by with no more mention than a character’s hair color (which is how it’s treated in This, which played at Playwrights Horizons last fall) or does it have to be dealt with head-on (as in the musical Memphis)?

I’m not even going to pretend to have answers to these questions.  But I am glad that I got to see these shows and I’m hoping that I’ll have lots of others to see and similar questions to ponder in seasons to come.

In the meantime, below is a look at the shows that dealt with racial characters and themes over the past six months. Click on the photos on the left or right side of the screen to "flip" through the stack; clicking on the center photo will take you to my review of that show.  You can also view the entire survey in a timeline, as a list or even in a map view of the theaters in which they played by clicking the tabs at the top of the viewing screen below.

Personally, I'm uncomfortable when I hear epithets onstage, even if they're uttered by a character or written by a playwright who's a member of the group being slurred.

It was kind of startling when I saw Fences last fall in Boston, even though the characters and the playwright are black. I mean, I loved the play and I understand the language wasn't intended to be hurtful but it's still jarring to me.

We've become immune to swear words but I think epithets still have the power to shock, so they're a potent weapon for a writer.

In terms of referring to an actor's race or color, I think it depends on the show. I saw "110 in the Shade" and really enjoyed it. John Cullum played the father of Audra McDonald and Bobby Steggert and no mention was made of race. The musical is sort of a fantasy/fable anyway and the color-blind casting worked fine.

As for black characters acting foolish onstage, I don't think I've seen a performance that fits that category yet. But I think there's a line between being foolish and just becoming a stereotype, and we've seen far too many of those.

Hey Esther, thanks, as always, for the thoughtful comments. Race remains such a hair-trigger topic that regardless of whether I liked their individual shows or not, I'm glad that playwrights and producers are mustering up the courage to take it on.