The Fine Old Men in "Ages of the Moon" 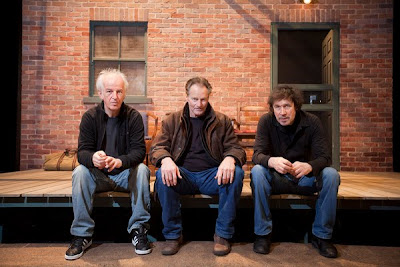 New York seems to be in the midst of an undeclared Sam Shepard festival.  A revival of the playwright's 1980 classic True West opened at The Lion theater on Theater Row a couple of days ago. And a starry new production of his 1985 play A Lie of the Mind, with Keith Carradine, Josh Hamilton, Marin Ireland, and Laurie Metcalf under the direction of Ethan Hawke, is scheduled to open at The Acorn in the same theater complex on Feb. 18.  But there’s also a new Shepard work in town.  It’s a small one-act play called Ages of the Moon and it opened at the Atlantic Theater Company's Linda Gross Theater on Wednesday night.

Over the years, Shepard and David Mamet have been in an arm-wrestling contest for the title of America’s most macho playwright. But Shepard, now 66 and four years older than Mamet, seems to be mellowing. Although Ages of the Moon has the usual share of drinking, cussing, sex talk and, of course Shepard’s trademark outbursts of violence, there’s a tender ruefulness to this play that affected me in a way that his other works haven’t.

Ages of the Moon deals with aging, death, the ambiguity of memory and the hope that love can ease the inevitable approach of the final eclipse. Its protagonists are two old-time friends who reunite in an isolated hunting cabin where Ames, played by Stephen Rea, has summoned Byron, Seàn McGinley, to console him after Ames’ wife has thrown him out following his fling with a 23 year-old.
The two men sit on a porch and reminisce, fall out, make up, fall out again. They’re the literary and spiritual sons of Beckett’s Vladimir and Estragon in Waiting for Godot, only Shepard’s guys are backed up by a soundtrack of country music. The song “Have You Ever Been Lonely” is playing as the audience enters the theater.
Shepard wrote the two-hander, which premiered last year at Dublin’s Abbey Theater, for McGinley and Rea and these splendid actors make entertaining company, even if Rea mugs a little too much at times. Irish director Jimmy Fay, an old-hand at Shepard plays, nicely mines the humor and the pathos in the text. And the creative team is top shelf too. I got a particular kick out of the appropriately ridiculous two-toned shoes costume designer Joan Bergin found for Rea even if they made his feet look as big as a pair of Mini Coopers.
This isn’t a major Shepard work—the play runs barely 75 minutes—but that doesn’t mean it's an insignificant one.  Maybe it’s the fact that like Shepard, I am growing older and have become more tolerant.  Or that I saw Ages of the Moon with Ellie, my oldest friend with whom I’ve survived bouts of falling out and making up too numerous to count.  But I left the play, which is running through March 21, comforted by its message that even the scariest night can be tempered by the grace of friendship.

Labels: A Lie of the Mind, Ages of the Moon, True West

Thanks! And I hope you'll keep reading and commenting too.