No Redemption with "The Retributionists" 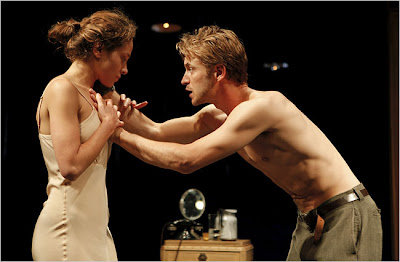 Valor in World War II and the horrors of the Holocaust have fueled popular culture for nearly 70 years now—from “Casablanca” and Lillian Hellman’s Watch on the Rhine to last year’s little-seen movie “The Reader” and the short-lived Broadway production of Irena’s Vow with Tovah Feldshuh as a Polish Catholic who hid Jews from the Nazis. The life-and-death drama of that time can still stir audiences but it makes sense that storytellers start looking for new ways to tell those now-familiar tales. Lately, they’ve been finding the answer in stories of revenge.
I don’t know if they’re sprouting up because Nazis are still the only bad guys that everyone agrees it’s OK to bash or it’s just heavy-duty wish fulfillment about kicking some al-Qaeda butt.  Whatever the reason, over the past month, I’ve seen Jews engaging in some heavy-duty payback in Quentin Tarantino’s new movie “Inglourious Basterds,” on the DVD of “Defiance” with Daniel Craig and Liev Schreiber as Jewish partisans, and in The Retributionists, a new play by Daniel Goldfarb that opened Monday night at Playwrights Horizons.  The play, alas, proved the least satisfying.
But it wasn’t the vengeance-is-mine theme that drew my buddy Bill and me to see The Retributionists.  We were intrigued by the folks on its creative team. Leigh Silverman has directed shows like Well, Yellow Face and Hunting and Gathering that one or the other of us enjoyed in the past and we were both eager to see what she would do with this one. Susan Hilferty, the Tony-winning costume designer for Wicked is a wiz when it comes to outfitting shows (click here to listen to her recent Downstage Center interview).  And Tom Kitt, fresh from his Tony wins for Next to Normal, wrote the incidental music.  We bought tickets.
The play, inspired by a true story (a New York Times clip is posted in the lobby),  is about a group of young people who band together after the war to kill one German for every Jew who died in the Holocaust. Their plan eventually settles on having one of their members who can pass as an Aryan get a job in a German bakery so that he can poison the bread. Complicating thing is the fact that all of the conspirators, at least in this play, seem to have been lovers at one time or another.

It isn’t as silly as the summary above sounds.  But it’s not as involving as it should be either. Goldfarb, who often writes about Jewish identity, says he wanted to do a play that looks at what happens when “all the rules of civilization go out the window” (click here to listen to an interview with him) and he clearly wants to look at the effect revenge has on the avengers. That’s all worthy stuff for a play to consider. But this production simply doesn’t have enough muscle to shoulder that kind of existential weight.
Goldfarb’s efforts to recreate 1940s-style dialogue come across as self-conscious and stilted. Silverman’s previous works have dealt with modern subjects and she seems far more comfortable with that sensibility than she is navigating a period piece. Neither the characters nor the situations come off as believable. Hilferty’s film-noirish costumes are fine but Kitt’s movie-score music barely registers.


Good acting might have saved the day but the performances are no better than you might find on the stage of a decent community theater. Almost everything—the mix of desperation and determination the characters feel—is played on the surface and the few attempts to go deeper slip over the line into melodrama. Revenge, the saying goes, is a dish that is best served cold but what we get here is simultaneously overheated and undercooked.