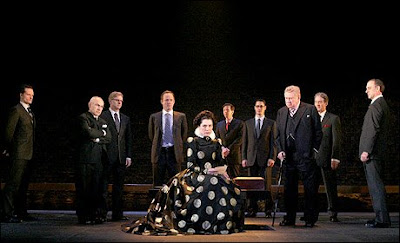 Mary Stuart, Friedrich Schiller’s drama about the deadly rivalry between Elizabeth I and Mary Queen of Scots, was high on the list of the plays I most wanted to see this season for two reasons: (1) I am hopelessly obsessed with works about England’s Tudor kings and queens and (2) great parts for female actors of, as they say, a certain age remain hard to find. My one reservation was that the play, which dates from 1800, had originally been written in German free verse and I wasn’t sure I was up for that, not even in translation.

I needn’t have worried, and nor should you. The Donmar Warehouse production that opened at the Broadhurst Theatre on Sunday night has been given a contemporary makeover by the British playwright Peter Oswald that’s colloquial and easy on the modern ear. And director Phyllida Lloyd and designer Anthony Ward have added updated touches too.

Back in 1971, when Mary Stuart was last performed on Broadway (with Nancy Marchand as Elizabeth and someone named Salome Jens as Mary) it had a cast of 25 and everyone wore Elizabethan dress. This time out, there are just 15 actors and only the queens—Harriet Walter (who is 58) as Elizabeth and Janet McTeer (who turns 48 next month) as Mary—are decked out in 16th century garb, while their male courtiers are dressed in modern-day business suits. The scenery is practically non-existent—a few benches, a table and a trunk, all positioned in front of a brick wall that is as formidable and immutable as the fate that awaits the two women.

The spare look seems to have been born of necessity: the budget was too small to support a full court and period dress and so, "This made us look for more imaginative ideas than we might have if we'd had the big cast and lavish costumes that Schiller's play calls for,” Walter told Playbill (click here to read the full interview she and McTeer gavee the magazine).

I confess that I was disappointed when the first group of noblemen walked on stage wielding attaché cases instead of broad swords. And I found the play's first act a bit talky and stuffed with exposition (although my husband K pointed out that can be helpful for people who aren't up on their Tudor history). But, in the end, the magnificent acting won me over.

McTeer's performance is the crowd-pleaser. Schiller makes Mary, who provides a rallying point for the Catholics who opposed the new Protestant faith that brought Elizabeth to the throne, the most sympathetic character and it's her story the play charts, as she is convicted of trying to usurp the English crown and vainly seeks a stay of execution from her cousin Elizabeth or a paladin who will help her escape before she is lead to the scaffold. McTeer burns through the full spectrum of emotions—anguish, defiance, coquettishness, contrition, courageousness, submission— that Mary experiences.

Schiller’s view of Elizabeth gives Walter a somewhat narrower emotional range to play—imperiousness, insecurity, and ultimately isolation—but the actress burrows deep into them. And it was her performance that won the Evening Standard Best Actress Award when Mary Stuart played in London in 2005. The climactic scene where the queens meet lives up to the anticipation, even though the event never happened in real life. And it’s preceded by a great coup de theatre: a 10 minute rain storm that soaks Mary, the stage, and probably a few of the audience members in the first row.

The male characters, ably played by American actors and the South-African born Brian Murray, are the courtiers who flock around both queens. They are also symbols of all the ways in which men often seek to control women—sex, patronization, betrayal—even when, or perhaps especially when, the women are powerful ones.

It’s a very good thing that McTeer, Walter and their costars are so very good because there were all kinds of distractions at the performance K and I attended. One of the speakers hissed static during some of the key speeches. A woman brought her dog to the theater and when several audience members complained to an usher, he insisted that the dog—a tiny dust-mop of a thing with long bangs—was a seeing eye dog and thus had a legitimate right to be there even though I later saw the dog’s owner waving at friends in the balcony. But at least the dog was quiet. A nearby audience member snored loudly throughout the performance, prompting some around him (or her) to giggle at inopportune moments.

Despite all that the production was majestically impressive. This season has brought many treats for people who like their theater smart and witty—Exit the King, God of Savage, 33 Variations, The Norman Conquests, which opens later this week—and Mary Stuart ranks high among them.