Who Are the Most Powerful Women in Theater? 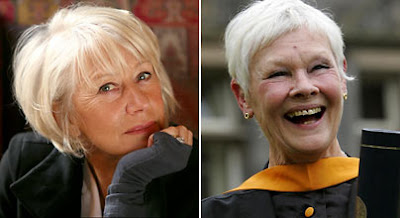 I had planned for this entry to be about Jane Fonda’s triumphant return to Broadway in 33 Variations, the new play by Moisés Kaufman, but then I came across Harper’s Bazaar UK’s list of the 20 Most Powerful Women in the Theater in London (click here to see the full list) and I knew Jane, a feminist to the bone, wouldn’t mind if I put off writing about her show until my Saturday post so that I could talk about the list now (but if you’re dying to know, I’m going to say good things about her and the show).

Judi Dench made the Harper’s Bazaar list. So did Helen Mirren, who as I’ve noted in one of my tweets (click here to see everything I’ve written on Twitter) will star in a new production of Phèdre at the Shakespeare Theatre Company in Washington, D.C. in September. And so did Gillian Anderson, who is best known on this side of the pond for her work in the TV series “The X-Files” but has won honorary Brit status for her work there including a Donmar Warehouse production of A Doll's House scheduled to open this spring.

Of course the fun thing about lists is that they usually tell us more about the people who compiled them than the folks who end up on them. And that’s probably true for this one too. I can’t even pretend to be knowledgeable about London theater but I bet if there were a gender-neutral list of its 20 most powerful people, I’d recognize a helluva lot more male names on the list. In fact, I’m sure there would be a helluva lot more male names on that list than female ones. Cause the sad bottom line is that guys are still in charge.

All of this set me to thinking about who would make the cut for a list of the 20 most powerful women in New York theater. So I made up my own list. And here, in alphabetical order, it is:

Victoria Bailey, executive director of the Theatre Development Fund, the folks who are best known for running the TKTS booth but who also do other good stuff like introducing NYC public school kids to theater

Whoopi Goldberg, who uses her spot on TV’s “The View” to give Broadway shows national exposure

Susan Haskins, the executive producer of "TheaterTalk," which offers the best conversation about theater

Donna Karger, the host of NY1’s "OnStage," which provides the most complete coverage of the New York theater scene

Nina Lannan, the leading general manager who makes sure that shows like Billy Elliot and the upcoming 9 to 5 run smoothly, while also finding time to serve as chair of the Broadway League

Elizabeth McCann, who for over 40 years has produced such daring shows as Edward Albee’s The Goat, Or Who Is Sylvia and Stew’s Passing Strange

Lynne Meadow, the longtime artistic director of the Manhattan Theatre Club, the perennial incubator for new plays like Proof, Doubt and now Ruined

Rosie O’Donnell, the tireless promoter of Broadway and the founder of Rosie's Broadway Kids, which teaches NYC school kids how to put on a show

Laura Pels, the angel whose generosity has made a difference at the Roundabout and the Public Theater

Mary Rodgers, the guiding light at the Rodgers and Hammerstein Organization, which holds the rights to all the R&H musicals but also represents other biggies like Jerome Kern, Stephen Schwartz, and Andrew Lloyd Webber

Carole Rothman, the artistic Director at Second Stage, which promotes emerging playwrights and is about to take over the Helen Hayes Theater

Judy Samelson, the editor of Playbill, which keeps more theatergoers in the know about Broadway than any other publication

Sherrie Rene Scott, the co-founder of Sh-K-Boom and Ghostlight Records, which provide an outlet for original cast recordings and albums by Broadway stars like Sutton Foster and Kelli O’Hara

Charlotte St. Martin, the executive director of the Broadway League, the trade organization that represents producers, presenters and theater owners across the country

Meryl Streep, because she’s Meryl Streep and can not only turn any show she does into a must-see but is also the mother of two up-and-coming young actresses who are setting the standard for their generation.

Susan Stroman, the Tony-winning director and choreographer behind shows like The Producers, Contact and Happiness, the new musical currently in previews at Lincoln Center

Julie Taymor, the innovative director who brought her downtown sensibility to The Lion King and who has now persuaded investors to give her $40 million to mount the upcoming Spider-Man musical

Paula Vogel, the Pulitzer Prize-winning playwright who has become a mentor to a new generation of writers like Gina Gionfriddo

Linda Winer, the longtime Newsday theater critic, who was the only female voice among the major critics until Elisabeth Vincentelli joined the New York Post this year.

Fran Weissler, the producer who, with her husband Barry, has become such a distinctive player in the industry that she's inspired characters in other people's shows

OK. Don’t just sit there grumbling, let the rest of us know what I got wrong, who should never have gotten on the list and who you can’t believe I left off.

You left off Jan of Broadway & Me.

Really sweet of you to say, Sarah B. But that's not even in the realm of possibility. However folks at All That Chat have come up with several terrific names that could muscle some of the ones I had (although there's no way, short of waterboarding, that you'll get me to say which ones) right off the list. The new contenders include: casting guru Tara Rubin, advertising whiz Nancy Coyne, St. Anne's Warehouse honcho Susan Feldman, and the prolific and terrific producers Carole Shorenstein Hays, Chase Mishkin, and Daryl Roth. None of them needs a list to validate what they've done and do for the theater, still my apologies ladies for not acknowledging you from the get-go.

Definitely add Robyn Goodman. She co-founded Second Stage and is now a producer. I would also add producers Barbara Freitag and Jamie deRoy. Barbara is producing some on her own and a lot with her husband Buddy. I also see Jamie at everything on and off Broadway, cabaret and at Lincoln Center. I would add actress and presence Angela Lansbury - I'm not the only one who loves her and people not only clamor to see her, they want to invite her to everything. The same with Marian Seldes. Also Phyllis Newman is an important woman in the theatre scene - she's on the Tony committee plus involved in so many charitable endeavors.

I like The Producers and Contact by Susan Stroman, but in Japan we don't know about Happiness.

I just found your blog this morning and what a delight!
It is going to rain all weekend here in Miami Beach, so I shall sit back & read all your older posts. I have also sent your link to a couple of old Broadway performers. I know they will enjoy it also.

Welcome queer heaven and many thanks for one of the kindest comments I've ever gotten. Thanks too for the recommendation to your friends. I hope you're enjoying the other posts and that you'll become a regular reader and commenter. Albest, jan

Thank you for including Linda Winer in your list of powerful women. Linda is a brilliant and intuitive theater critic for Newsday, and I never miss her reviews. I am especially proud of her, since we're first cousins! I did want to mention a small correction, that the correct spelling of her name is Winer not Weiner.
Thanks for giving Linda the recognition she vastly deserves.

Marcie, thank you so much for reading B&Me. And my most sincere apologies to you and Linda for misspelling her name. That's a cardinal sin in my book (especially when you're trying to pay someone a compliment!) and I'll make the correction.