Out and About in "The Drunken City" 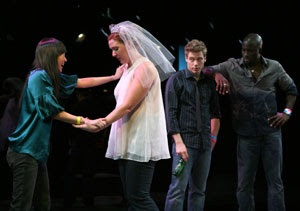 It wasn’t so long ago that gay people in plays were tragic figures who were struggling to come out or battling AIDS or sassy wiseacres who provided comic relief. But we now live in a different pop- cultural world, where a growing number of high schools have gay-straight alliances, rock stars like R.E.M’s Michael Stipe are openly gay and perhaps the most beloved character on the cult HBO crime drama “The Wire” was Omar, a stick-up artist, equally devoted to robbing drug dealers and romancing his male lovers.

Over the past few months, I’ve noticed a different kind of gay character popping up in new plays too. From Clarice Bernstein, the beleaguered presidential speechwriter played by Laurie Metcalf in David Mamet’s November; to Howie, the teenager who is totally unself-conscious about his sexuality in Stephen Karam’s Speech & Debate, these gay characters are the most stable and self-assured people in their shows. And now comes Adam Bock’s The Drunken City with two gay characters who are not only the anchors for their flighty friends but also of this meditation on love and marriage among today’s tewentysomethings.

I got a kick out of Bock’s last play, The Receptionist, and so I decided to see this new one without knowing a thing about it. My buddy Bill, always game for a theater adventure, met me at the Peter Jay Sharp Theater, one of the new spaces that Playwrights Horizons operates on 42nd Street, where The Drunken City is playing through April 20. The one-act show, which centers around six young singles who meet, hook up and fall out on a drunken night on the town, is slight but appropriately giddy and Bill and I had a good time.

Bock specializes in snappy dialog that sounds like the kind of thing that people, or at least I, always wish they had said. The performances by the good-looking, interracial cast, lead by Cassie Beck's amusingly conflicted bride-to-be, is yet more proof that New York City is currently overflowing with a bumper crop of talented young actors. And David Korins’ clever set design, aided by Matthew Richards’ nimble lighting and Bart Fasbender’s smart sound design, create an evocative cityscape.

But what really struck me is the way the gay guys are portrayed. They don’t have swishy, stereotypical jobs—one’s a dentist, the other a baker. They’re comfortable hanging out with straight friends. Their concerns are ones we all share: how to care for our friends, where to find love and how to be true to one’s self. Having gay people portrayed just as people, now that's truly intoxicating.

Labels: November, Speech and Debate, The Drunken City, The Receptionist

I liked "The Receptionist," although in the end, I think it was a little too cryptic for me. I definitely want to second Bock's snappy dialog, though. I thought Jayne Houdyshell was terrific in the title role, and she had a lot of great lines.

I'm actually going to get a second chance to see the play, because Trinity Rep is doing it next season. (I didn't realize it, but Bock used to work at Trinity and he wrote the play with one of the company members in mind for the receptionist's role).

Anyway, "Drunken City" sounds interesting, and I'm glad there are some refreshingly nonstereotypical gay characters. One thing I really appreciate about "Passing Strange" and "In the Heights" is that you have African-American and Latino characters telling their own stories, and doing it in a very human, nonstereotypical way.

And you are so lucky to have a great theatre buddy like Bill!

Thank you, you made my day.

I'm still reading your January but I'll write you a better e-mail when I get to April.

Esther, I'll really be interested to read what you think about The Receptionist when another actress takes over Houdyshell's part. She's about to open in another show here and I'm eager to see it cause she really brings the goods.

Cat, welcome and many, many thanks for digging into the archives too. Will look forward to more comments from you.