The Harrowing Flight of "Blackbird" 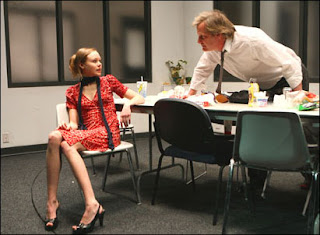 There are some people who just have to see a new movie on its opening weekend. And that's kind of the way I am about shows. I like to go during previews or in the first week or so after a show has opened before there's been so much talk about it that the chance to discover its pleasures for myself has been ruined. But there's so much to see in New York, especially in the spring when at least one show a week opens on Broadway alone, that I can't always see every one of them as soon as I'd like. Which is why my friend Ellie, the one-time actress, and I didn't get to the Manhattan Theater Club's sold-out production of Blackbird, until the show's closing weekend.

When I arrived at the theater, Ellie was standing outside talking about the show with Tony Kushner, the author of Angels in America. I stepped away, not wanting to know too much of what he thought about Blackbird but I couldn't help hearing him say that he'd seen the show before and found it so devastating that he'd come back. Blackbird, the story of what happens when a middle-aged man and the 12-year old girl he sexually abused meet 15 years later, seems to have that kind of effect on people. It was a hit at the Edinburgh International Festival in 2005; won the Laurence Olivier Award for best new play in London last year, and this production, starring Jeff Daniels and Alison Pill, pleased most of the New York critics as well.

Everything seemed right about it. Director Joe Mantello coaxed out all the notes of ambiguity in the appropriately-named David Harrower's script. Set designer Scott Pask, who had five new shows on Broadway this past season, including his collaboration with Bob Crowley on The Coast of Utopia, created a pitch perfect environment for the uneasy pair. As did Laura Bauer's understated costumes. Paul Gallo's lighting and Darron L. West's audio design leant particular support. And yet none of it would have worked without the raw and vulnerable performances given by Daniels and Pill, an angular-limbed, baby-faced 21 year-old star in the making who last year won a Tony nomination for The Lieutenant of Inishmore and has already signed-on to star with Bobby Cannavale in Mauritius, a black comedy scheduled to open on Broadway in October.

At the end of Blackbird, my fellow audience members, seemingly as devastated as Kushner had been, sat in silence and only started to applaud when the actors stumbled onto the stage for their bows. I say "stumbled" because I can't remember seeing actors more drained by the emotional journey they had just taken. Daniels and Pill had stripped themselves naked and there simply hadn't been enough time between the final fade out and the curtain call for them to cover their exposed nerve endings. They starred at us with dazed expressions. They bowed, but they didn't touch hands as actors often do. And then, struggling to summon up the last of their strength, they almost staggered off stage. I don't know if their response was the same at every performance, or if it would have been the same if we'd seen them earlier in the run or if it was the accumulation of the emotional toll of the last three months but I do know that the fearlessness of their performances left me devastated.

Labels: Blackbird, The Coast of Utopia

Well, you were lucky to see it when you did. I saw it at a Wednesday matinee with a bunch of high school kids who were totally unprepared for the intensity of the play. (And I'd really like to thank the genius who thought it was a good idea to have kids see the show . . .)

I usually don't like Daniels, but was very impressed by him in this -- and even moreso after seeing the production here in San Francisco at ACT which completely missed the boat as far as I was concerned.

The biggest problem in SF was the set -- which was a series of horizontal planes that spanned the full width of the Geary Theatre (something like 35 feet). That and the size of the house ate up any intensity the script had. (When the third character appeared at MTC, it was like a gunshot; here, it was almost an afterthought.)

ACT has a perfectly good small space that would have been perfect for Blackbird, but it's far from the first (or last) time they've made a poor artistic choice . . .

I like your site and I'll be back -- thanks!

Many thanks, Nell. I hope you will come back and that you will continue to comment