This "King Lear" is Listless 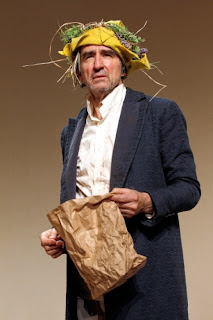 There’s not much scenery on the stage at The Public Theater’s Newman theater space where a new production of King Lear opened this week but that doesn’t stop nearly everyone on stage from chewing on it.  Including an actor in one scene who literally gnaws on a glove while he takes his time dying.

This is the third major Lear this year (click here to read my review of Derek Jacobi's turn in the role) but it’s always intriguing to see how actors at the top of their power will play the vain king who impetuously divides his kingdom between his two older daughters but banishes the third when she refuses to flatter him, setting off one of Shakespeare’s greatest tragedies. This, however, may be the most hapless King Lear I’ve ever seen.

The production has been nominally directed by James Macdonald but he doesn’t seem to have been able to get anyone to agree on how they should all approach the piece. Instead, each actor just does his or her own thing. The result is akin to what the Tower of Babel must have been.

It’s not that the actors aren’t talented. Frank Wood, John Douglas Thompson, Kelli O’Hara, Arian Moayed, Michael McKean and Bill Irwin have all been justly acclaimed for their work in other productions.  But only Thompson, as the loyal Kent, manages to keep his footing in this one.

Even an elegant actor like Moayed, who brought such understated poignancy to the role of the Iraqi interpreter in last season’s Bengal Tiger at the Baghdad Zoo, flails about here, particularly in the scenes in which his character Edgar masquerades as the madman Tom.

McKean keeps his dignity as Edgar’s father Gloucester but at the price of being dull (click here to read a livelier interview he gave).  O’Hara is equally bland as Lear’s second daughter Regan. Wood plays Regan’s husband Cornwall as though he’s trying out for the role of a capo in a mobster movie.  And then there’s Irwin.

It seemed an inspired idea to have Lear’s Fool played by Irwin, a professionally-trained clown who can also be dramatically affecting as he showed in the 2005 revival of Who’s Afraid of Virginia Woolf?.  But Irwin, dressed in a costume of fluorescent yellow that looks as though it were borrowed from a Teletubbie, cuts up and shows off and throws an already wobbly production even further off-kilter. (Click here to read an interview with him.)

Of course it is Lear’s play and so all of the above would matter less if the title character were well played.  But Sam Waterston lost me almost from hello. Waterston is now best known for his long-running role as Jack McCoy on “Law & Order” but he got his start as a stage actor and has played a dozen Shakespearean roles at the Public, including, most notably, Benedick in Much Ado About Nothing and Hamlet.

Waterston's take on Lear seems to be that the king is suffering from some form of early onset senility or maybe Parkinson’s Disease.  Waterston’s voice shakes and his hands tremble so much in the first scene that I wondered if the actor might actually be ill.
I suppose you could call that good acting but because his Lear seems so far gone right from the start, there isn’t really anyplace for him to go as madness descends. So, Waterston overacts, throwing out his arms like some hammy 19th century actor when he speaks and stomping his foot when he wants to be emphatic. He's too good and experienced an actor for such shenanigans.

The creative team has lost its way too.  The centerpiece of Miriam Buether’s set is an annoying chain curtain that clangs and drowns out the dialog anytime someone touches it. Which is often since it’s the main way the actors enter and exit the action.
Costume designer Gabriel Berry apparently couldn’t make up her mind about which era to invoke and so takes a grab bag approach—some characters wear traditional 16th century garb, others look as though they’re in a movie from the ‘30s, a few sport contemporary looks and, of course, there’s Irwin.

Meanwhile, sound designer Darron L. West has too grand a time booming out the noise of the thunder from the storm in which Lear has his famous mad scene and the bombs and machine guns that are used in the civil war that eventually breaks out after Lear’s abdication.
To paraphrase a line from another Shakespearean tragedy, the whole thing adds up to a lot of sound and fury signifying very little.